Why Workers at Progressive Nonprofits Are Unionizing 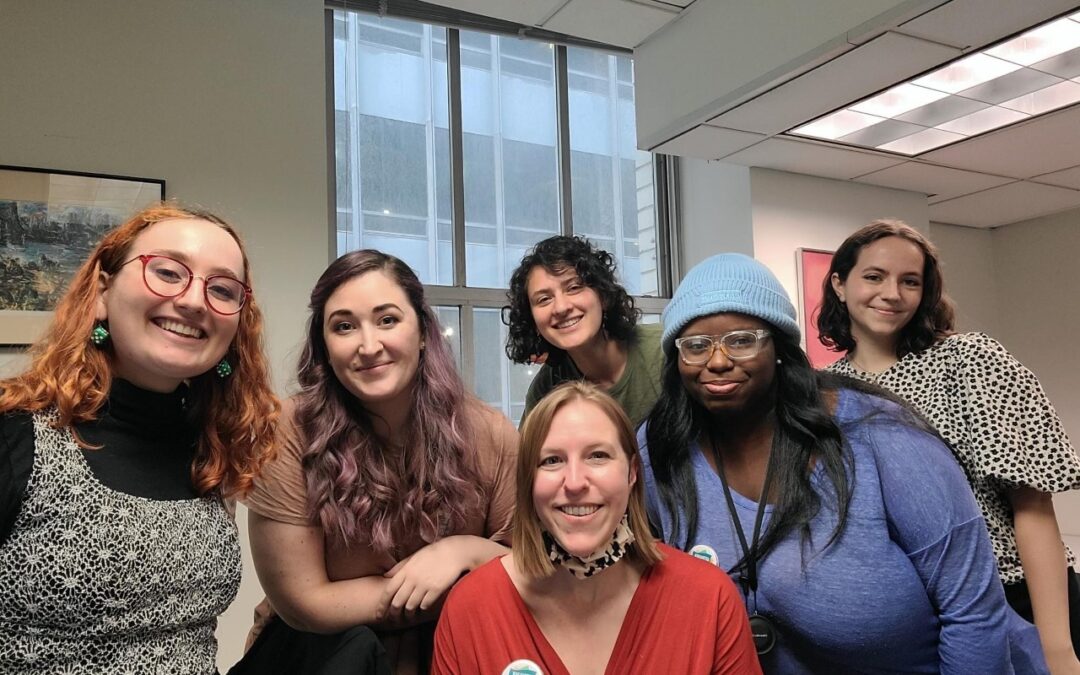 Workers at nonprofit organizations across the United States, like those from the Guttmacher Institute (pictured above), are organizing not only for better working conditions, but for a stronger progressive movement.

A false narrative promoted anonymously in a recent article suggested that unionization at progressive nonprofits somehow weakens the progressive movement at large. Whether simply uninformed or, more likely, intended to create divisions during an active NLRB election, the implication that union organizing is somehow at odds with the progressive missions that drew us to our organizations in the first place is utterly disproved by our experiences fighting for and winning unions at our nonprofits. Those of us on the ground know workers’ rights, reproductive rights, racial justice, LGBTQ+ rights, environmental rights, disability rights, and women’s rights are not only compatible but inextricably linked to each other. We fought for progressive unions at our progressive workplaces precisely because we care so deeply about building a powerful progressive movement.

“We need unions to help empower workers, including nonprofit workers,” said Doris Chiu, a senior research assistant since 2018 at the Guttmacher Institute, the nation’s leading reproductive rights research and policy organization. “Tolerable workplace conditions are the bare minimum for our organizations to build a better world.”

That sentiment is why a supermajority of Guttmacher staff requested that their employer voluntarily recognize their union, Guttmacher Employees United, the same day news of the Supreme Court’s upcoming decision to overturn Roe v. Wade leaked.

Their request, the workers wrote in a recent op-ed for Strikewave, was a direct reflection of their commitment to the preservation of reproductive rights—one shared by a growing number of reproductive rights workers organizing nationwide. A union contract, staff wrote to Guttmacher management, would preserve talent and prevent turnover at a critical time. Remedying long-standing workplace issues like a lack of transparency, inequitable compensation, and mistreatment of lower-paid staff—issues that resonate with nonprofit workers across the nation—would also strengthen the fight for abortion rights by ensuring talented staffers with institutional knowledge remain at the Institute.

Disappointingly, management refused to recognize Guttmacher Employees United without an agreement that would have sacrificed essential union rights, instead forcing an unnecessary NLRB election at a pivotal point in the fight to protect abortion access. Even though Guttmacher staff publicly declared their intent to unionize with OPEIU Local 153, Guttmacher hired a notorious union-busting law firm to stop the effort, expending time and significant resources to prevent us from exercising our workplace rights. (See Jezebel‘s article: Major Reproductive Rights Groups Are Refusing to Recognize Their Staff Unions.)

Despite this bad-faith pushback from Guttmacher and many of our employers, members of OPEIU’s Nonprofit Employees United are sticking together, winning recognition of our worker-led unions and securing better working conditions at the bargaining table through strong first contracts. At American Jewish World Service, we won a $60,000 salary floor, a grievance process, and prioritization of internal candidates when filling vacancies. With the National Endowment for Democracy Union, we won flexible work schedules and financial support for immigrant workers to address issues with their visas. At RepresentUs, we doubled retirement contributions, doubled the amount of parental leave staff are entitled to, and ended non-disclosure agreements and non-compete clauses once and for all.

“Like so many other advocacy-focused nonprofits, our union drive came after years of instability, turnover, stress, and uncertainty,” reads a collective statement from workers at RepresentUs, a grassroots anti-corruption advocacy organization, who won their union with OPEIU Local 153 in 2021. “We didn’t take this job for money or recognition. Every one of us is here because we believe in the organization’s mission.”

That fundamental belief is why nonprofit workers across OPEIU came together in union in the first place, and why we then organized within our union to create Nonprofit Employees United. The issues we face differ from workplace to workplace, but our goals are the same: we want good jobs for people who do good work to build a better world.

“Those of us who would have left before the union drive, taking their talent and passion with them, now see a future here,” continued the statement from workers at RepresentUs. “A union drive isn’t a meltdown—it’s a renewal. Anyone who takes the time to listen to workers knows that.”